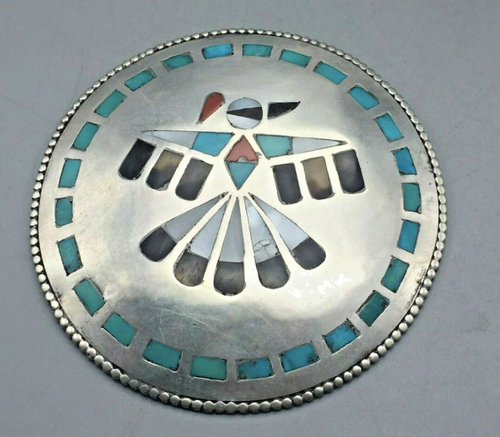 Description: This is a large and beautiful inlay pendant. Set with shell, turquoise, coral, and mother of pearl. Fixed with a Shepard's hook so you can put on many different strands of beads or a chain! Tested as sterling silver. This pendant is from the famous, Jewel Box collection. The Jewel Box was owned by Morrey and Honeylou Resnick. They opened in 1949 and were located in downtown Phoenix. Later it was moved to North Central Avenue, until it closed in May, 2006. Over the years, they amassed a large collection of Native American Jewelry. Several of their pieces were photographed in the famous Arizona Highways turquoise issues from the 1970s, including the well-known magazines of the January 1974 issue, the August 1974 issue and the March 1975 issue.

Maker: Hallmarked with DM, could be one of several makers. We were not able to identify the hallmark with certainty.

A Stunner! This Vintage Three Piece Squash Blossom Necklace Set Is A Must See!