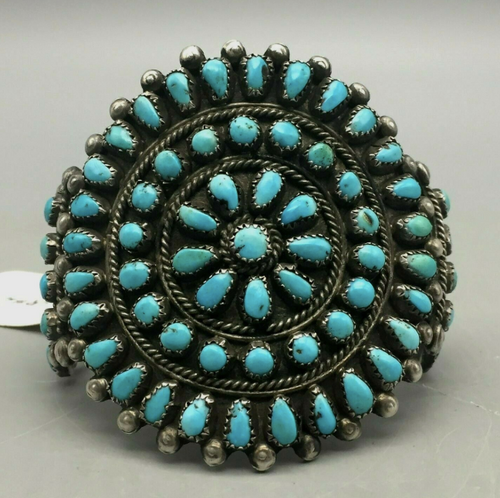 Description: This great vintage turquoise cluster bracelet is from the famous, Jewel Box collection. The Jewel Box was owned by Morrey and Honeylou Resnick. They opened in 1949 and were located in downtown Phoenix. Later it was moved to North Central Avenue, until it closed in May, 2006. Over the years, they amassed a large collection of Native American Jewelry. Several of their pieces were photographed in the famous Arizona Highways turquoise issues from the 1970s, including the well-known magazines of the January 1974 issue, the August 1974 issue and the March 1975 issue. The Reznik's original tag and information has been left attached. This great bracelet is set with 76 natural turquoise stones and is listed as being from the Jewel Box pawn vault collection and was in the owner's collection. It has a great old patina from the 1950s. Tested as sterling silver.