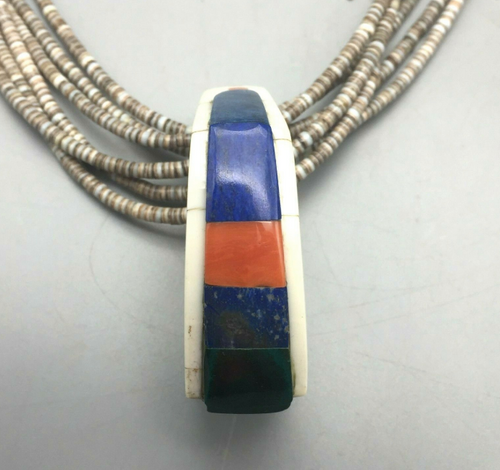 Description: This is a unique necklace by Dee Morris! It is from the famous, Jewel Box collection. The Jewel Box was owned by Morrey and Honeylou Resnick. They opened in 1949 and were located in downtown Phoenix. Later it was moved to North Central Avenue, until it closed in May, 2006. Over the years, they amassed a large collection of Native American Jewelry. Several of their pieces were photographed in the famous Arizona Highways turquoise issues from the 1970s, including the well-known magazines of the January 1974 issue, the August 1974 issue and the March 1975 issue. The Reznik's original tag with information has been left attached. Dee Morris is also well-known for his turquoise covered bison skull that was on the cover of the January 1974 Arizona Highway magazine! Here is a chance to own a piece from a famous, published artist!

Maker: Dee Morris is an Anglo who was adopted by a Navajo family and is often listed as a Navajo artist. He is in various Native American hallmark books.